It was early November 2014, when Africa’s deadliest Cobra was making its way along the sands of a calm beach in Cape Town, South Africa. The notorious Cape Cobra was literally taking a dip in the shallow waters of Hout Bay beach, as it was suddenly spotted by a local beach stroller.

What would you do if you encountered a deadly Cape Cobra while walking on the beach?

Pictures of the extremely venomous snake were immediately uploaded to Twitter and social media, spreading instantly throughout the web and news channels. The Cape Cobra quickly became a media sensation for several days, but why did he drop a visit to the beach?

Before I provide you the answers, let me first introduce to you the snake with the most toxic venom of all cobras in Africa. Known also as Naja Nivea and Yellow Cobra, due to his rich yellow color variation, the Cape Cobra is one of Africa’s non-spitting cobras. Other members in this fearsome group are the Egyptian Cobra and the Snouted Cobra. The Yellow Cobra lives in the southern parts of Africa, mostly in the Cape Province of South Africa, hence its name. However, it can also be found in the southern Kalahari, Botswana, Lesotho and Namibia.

The Naja nivea is a medium-sized cobra, and adults average about 3.9 to 4.6 feet (1.2 – 1.4 meters) long. Experts claim they may even grow up to 5.2 feet (1.6 meters). The longest Yellow Cobra on record was spotted in Namibia. It reached 6.1 feet (1.87 m). However, the Cape Cobra spotted in Cape Town’s beach this November, surprisingly reached an amazing length of 6.5 feet (2 meters)!, surpassing all known statistics. We’ll get back to the beach strolling cobra in a while.

First, I want you to watch this great introductory Video of the Cape Cobra:

As I mentioned, it is also called the Yellow Cobra, so this might sound a bit confusing, but Cape Cobras can widely vary in colors. They can range from blazing yellow to golden brown and up to dark brown and even black. Some experts claim that the colors are set according to the geographic area of the Cobra, while others claim to have observed all color schemes in one single location. In general, it is known that Cape Cobras deep in the Kalahari Desert of Namibia are mostly yellow. Some South Africans call them Copper Cobras due to their distinct yellow color. However, cobras in the West Cape, including Cape Town, are darker and more brownish, like the famous beach strolling cobra spotted this November…

So Why Did a Cape Cobra Visit a Beach?

During the media sensation that swiped South Africa, an interesting interview took place on South African radio station 567 CapeTalk. It hosted snake expert Shaun Macleod. According to Macleod, the Snake’s skin becomes irritated when he is about to shed, so he might soak in water to relieve that irritation. According to the Society for the Prevention of Cruelty to Animals (SPCA), it is quite normal for various reptiles to stroll down to the beach to cool down, specially during the hot season, as snakes come out of hibernation. However, in the specific incident on Hout Bay beach, the snake might have just ended up in the shallow waters because of the excited person who spotted him and started taking pictures, probably blocking the Cobra’s way, driving it into the sea.

Beyond his remarkable water dip, many experts were amazed by the Cape Cobra’s enormous size, which was far beyond the norm. According to Shaun Macleod, Cape Cobras normally don’t grow that big.

Where Do Cape Cobras Hang out?

Apart from strolling the beach once in a blue moon, the Yellow and Brown Cobras usually inhabit the heathland vegetation regions, the sub-tropical woodland ecoregion and the Arid savannas of South Africa, as well as the Kalahari and Namib deserts. The fearsome Copper Cobra can usually be found in rock crevices, abandoned termite mounds, hiding in holes underground such as rodent burrows or brush piles. It is also found along rivers and streams.

Cape Cobras are active throughout the day, and are hardly ever seen beyond sunset hours. During the daylight hours they will constantly hunt for frogs, rodents, lizards, birds and even other snakes. Despite being terrestrial, Cape Cobras are among the most professional climbers among snakes. They will easily and smoothly climb trees with low overhanging branches, on their way to raid nests and devour one of their favorite dishes, sociable weaver birds.

Watch this great BBC video of a Cape Cobra climbing up a tree and raiding a nest:

Does Cape Cobra Have Any Enemies?

Like most other cobras, the Yellow south african species can be attacked by the Ratel (Honey Badger), and by Meerkats, who belong to the famous Mongoose family. However, also eagles and various species of birds prey on the Cape Cobra from time to time. When challenged by any of his enemies, the Cape Cobra will usually hiss very loudly and prepare his deadly weapon, to attack…

Watch the cute enemies of the Yellow Cobra, the Meerkats, in action:

How Strong Is His Lethal Weapon?

As mentioned, the venom of the Yellow Cobra is regarded as the most powerful among Africa’s cobras. It is said to be thick as syrup, and is made up of deadly neurotoxins and cardiotoxins which attack the nervous and respiratory system, as well as the heart. The death rate from Cape Cobra bites is not very well documented, but is regarded as very high. The one and only anti-venom available is produced by the South African Institute of Medical Research (SAIMR). So if you ever encounter a Yellow Cobra, better stay away… 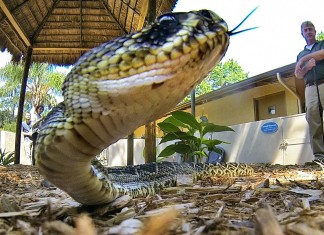 There are more than fifty types of Florida snakes that you would encounter in the beautiful sunshine state. Each of those types also has...

The Blue Tongue Lizard That Blew My Mind 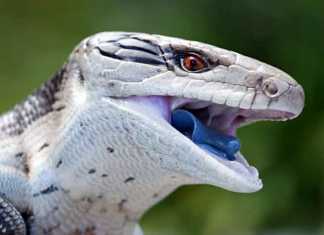 You may have come across some rare birds or exotic animals which blew your mind for a moment and the images have stayed with...

Do You Know These Fascinating Cobra Species?