What do turtles eat has no definite answer. There are hundreds of different species of turtles and thus there are many variations in their diets or dietary preference. Turtles were not domesticated for a long time and thus their options were entirely dependent on what was available in the wild. Besides, there are significant differences among the species based on their natural habitat. Freshwater turtles and sea turtles don’t have the same dietary habits. Likewise, aquatic and semi-aquatic turtles have their unique preferences and compulsions as well. The same difference applies to tropical and subtropical turtles. Considering the fact that there are more than three hundred different species and subspecies of turtles, what do turtles eat has a very exhaustive list.

Most turtles have a vegetarian diet. But some species of turtles can be carnivores. Contrary to popular perception, most turtles are not vegetarian. They are mostly omnivores. They eat plants as well as animals. Apart from the species, natural habitat and what the turtles may prefer and get in the wild; the jaws of the turtles also determine the kind of food they would eat.

A bit confused? Well, here’s a more organized list that answers the holy grail of turtle owners, “What Do Turtles Eat?”…

Since the dietary options for a domesticated or pet turtle is dependent on what is fed by the owner and not found by the turtle in a natural setting, a diet plan must be chalked out after consulting a vet.

Think you know enough to take our Turtle Quiz? If so, click here to take the quiz!

Look At These Gorgeous Turtle Pictures 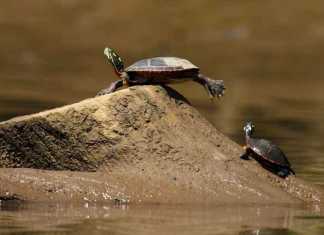 As we do periodically, the Cobras.org team has come together again in order to search for great Pictures. This time we selected a new thrilling...